Bringing BIM360 Revit and Navis models into VR and Unity, is no easy task.  I've been working with the InsiteVR team on helping them integrate a modified version of the Forge-AR/VRToolkit to make this work smoothly.

It lets InsiteVR focus on their core business - 'VR meetings for construction". A new way of comprehending difficult space & volume problems with your team, in a "Zoom"-like VR meeting. All your favorite BIM 360 review tools are there: markup, issues, annotations, screenshots - and they all sync back into BIM360 - keeping everyone in the loop.

But what has really changed the game, is a new piece of hardware, called the 'Oculus Quest', making VR accessible to everyone, with it's...

However, for developers, it presents challenges. Quest uses a Snapdragon mobile chipset, not a full 'desktop-class' NVIDIA set up. So developers, like InsiteVR, have to figure out a pipeline to get Unity to handle large model data-sets with mesh optimization's.  That's where Forge comes in.  Instead of InsiteVR focusing on getting the data, they can instead focus on building the best experience possible on mobile VR chipsets

It's portable and small enough, that you can shove it in your bag and take it on a construction site or office, quickly and easily.

How do I get started? 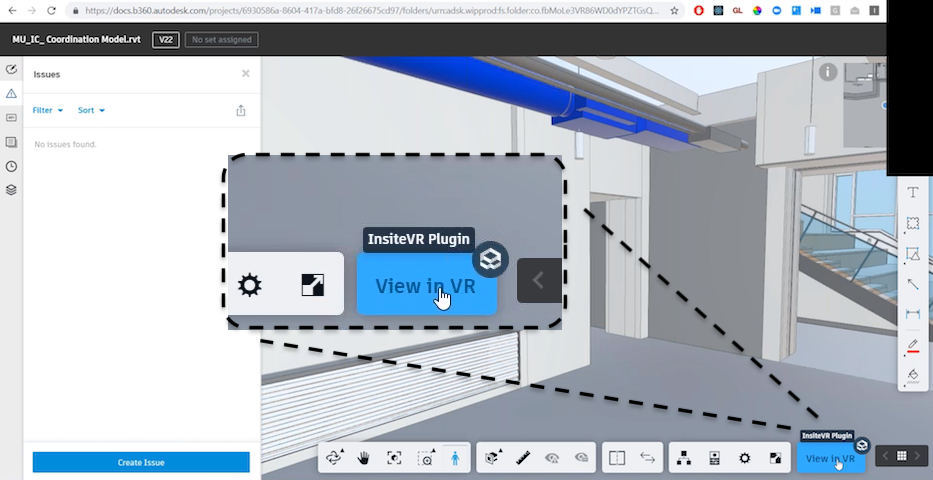 Just like a zoom meeting, you will get a 'meeting ID', which you can email (or slack) to everyone who's going to join the VR meeting.

Once your team member gets the meeting ID, they tap the meeting ID into the virtual keypad, and the 'tour-guide' starts, like this video:

For a complete walkthrough of a real-world example, take a look at this webinar from Josh Cheney and Paric Corp.

Angel Say (co-founder of insiteVR) and I, will be presenting the talk "BIM360 VR collaboration for AEC/Construction" at AU2019/Devcon on Monday Nov 18th at 3.30pm.  To find out more about how InsiteVR overcame the challenges of streaming big models into Unity, case-studies of VR solving for construction, or how to put a "VR-button" directly into BIM360 viewer, then sign up here:

“BIM 360 VR Collaboration for AEC/Construction with InsiteVR, Unity and Forge”

Hope to see you there !

Want to combine google-maps with your Revit model ? Then read on INTRODUCTION Use this Forge-Viewer extension to stream in Geo tiles from mapbox, bing maps, google maps, etc. Under the ho...

Follow @yiskang Have you ever thought "Draw some lines representing the walking paths and make the camera move along this path in the Forge Viewer"? This is an idea I heard from a couple ...